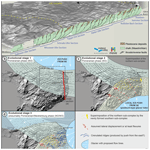 A wide spectrum of methods has been compiled to unravel the structural evolution of the Jasmund Glacitectonic Complex (JGC). The analyses of digital elevation models (DEMs) suggest a division into two structural sub-complexes – a northern part with composite ridges striking NW–SE and a southern part with SW–NE-trending ridges. Geological cross sections from the eastern coast (southern sub-complex) were constructed and restored using the software Move™ and the complementary module 2D Kinematic Modelling™.

The final geometric model of the southern sub-complex shows a small-scale fold-and-thrust belt (Fig. 1a). It includes three different orders of architectural surfaces (Pedersen, 2014): erosional surfaces and the decollement (first order), thrust faults (second order), and beds outlining hanging-wall anticlines as well as footwall synclines (third order). Thrust faults of the southern structural sub-complex are mainly inclined towards the south, which indicates a local glacier push from the S-SE (Fig. 1a).

The glacitectonic structures have a surface expression in the form of subparallel ridges and elongated valleys in between. Geomorphological mapping and detailed landform analyses together with the structural investigations provide an insight into the chronology of sub-complex formation. The northern part of the JGC is suggested to have been formed first by an ice push from the NE, followed by the slightly younger formation of the southern sub-complex (Fig. 1b, c). Partly truncated northerly ridges and their superimposition by the southern sub-complex indicate this chronology. Crenulated ridges and anomalies in the structural configuration of the easternmost part of Jasmund suggest a third glacier push from E-ENE (Fig. 1d).

Although there is a high number of scientific publications on the glacitectonic evolution of Jasmund, these presented models often lack a consistent theory for the development integrating all parts of the 100 km2 large complex. Therefore, the combination of all results leads to a more self-consistent genetic model for the entire JGC. 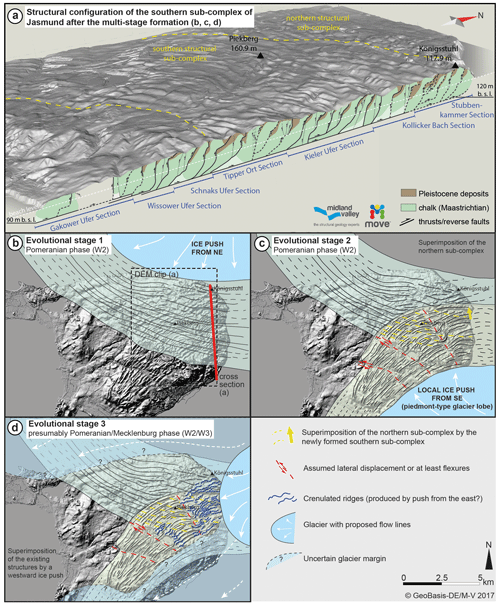 The data are publicly available via the thesis (dissertation online) and references therein.

The article processing charge was funded by the Quaternary scientific community, as represented by the host institution of EGQSJ, the German Quaternary Association (DEUQUA).

This paper was edited by Christopher Lüthgens and reviewed by one anonymous referee.